Virginia has become well-known for its gourmet peanuts, with farmers in the southeastern portion of the state producing millions of pounds each year. The legume, commonly referred to as a nut, is enjoyed raw or boiled as well as combined in many popular Virginia recipes, from peanut soup to peanut butter pie. They are now a staple crop and famed culinary flavor in Virginia, but did you know peanuts have a long and transformative history with a rise in popularity that culminated in the Commonwealth?

Peanuts were not a native North American crop, but instead are believed to have originated in South America somewhere near Peru or Brazil, where they were cultivated by indigenous peoples for over 2,000 years. Spanish and Portuguese traders would then transport the peanuts from South America to Mexico, then to countries across Africa and Europe.

After crossing the Atlantic, peanuts would again cross the ocean–this time with Africans forced into slavery and brought to North America in the early 1700s, where they would be planted in the fertile soil of Virginia for the first time.

But though peanuts came to the American colonies at the beginning of the 18th century, they would not become a culinary treat for many years, and instead were grown mainly for animal feed. It would take a technological leap and the work of a renowned biologist before the peanut would be recognized as a versatile (and delicious) crop. 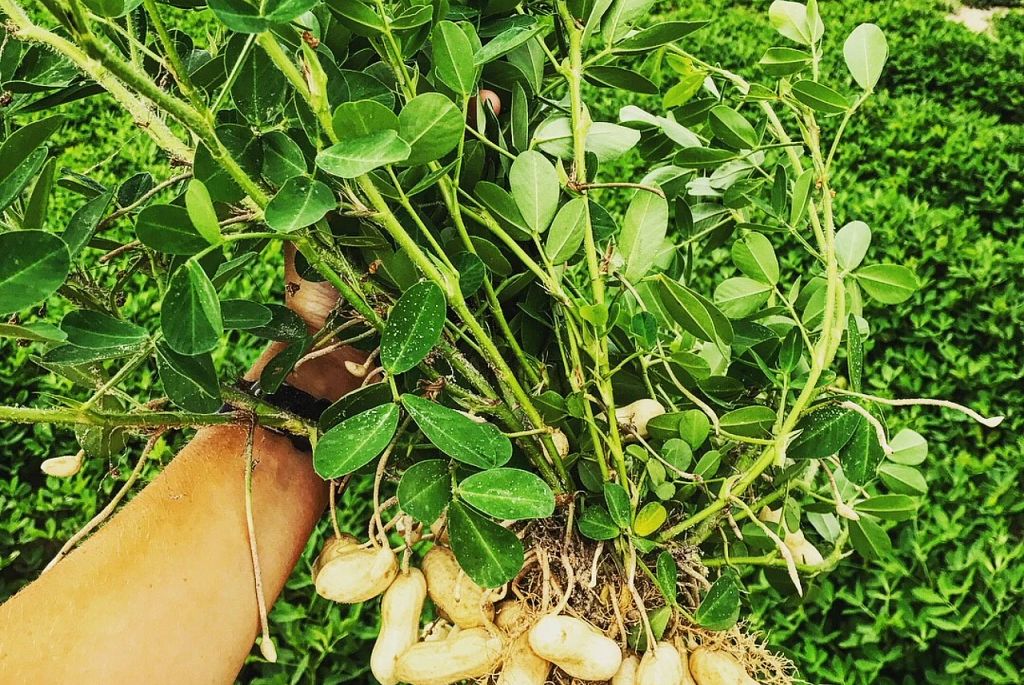 Virginia was the first known North American location for peanuts to be planted, but the name “Virginia Peanuts” is not just a designation for where the peanuts were grown. Virginia Peanuts are one of four distinct peanut varieties (the other three are Runner Peanuts, Spanish Peanuts, and Valencia Peanuts) and are not just grown in Virginia, but also in North Carolina, South Carolina, and Texas.

Peanuts were more of a novelty than a staple in American culinary history prior to the early 1800s, but their popularity would steadily grow over the early 19th century. Union soldiers during the Civil War came across peanuts in the South, and after the war ended, some soldiers returned home with peanut plants. The peanut’s popularity grew even more in the late 1800s as P.T. Barnum’s circus traveled across the country with vendors selling hot roasted peanuts to the crowds. But the peanut would really achieve widespread recognition with the help of a renowned biologist by the name of George Washington Carver.

Photo Courtesy of the Library of Virginia

Born into slavery in 1864 only a year before slavery would be outlawed, Carver, along with his sister and mother, were kidnapped from the Missouri farm on which he was enslaved by a band of slave raiders that roamed the countryside during the Civil War. Carver and his family were transported and sold in Kentucky, tragically separated during this time. The Missouri farmer, Moses Carver, who had previously owned the Carver family, sent a neighbor to Kentucky to retrieve them, but unfortunately, only George Washington Carver was located and brought back to Missouri.

Once slavery was abolished, Moses Carver raised George and his brother James, teaching them to read and write. While James would end his studies and take up working the farm with Moses, George developed a deep interest in plants and began creating his own natural pesticides. Neighbors would soon come to see George as a “plant doctor” who was able to help nearby farmers with his green thumb.

George Washington Carver contributed much to the study of agriculture, including introducing the now-widespread practice of crop rotation, but his biggest contributions would be to the farming and culinary uses of peanuts. During his lifetime, he came up with over 300 food, commercial, and industrial uses for peanuts, including cooking oils, paper, soaps, and cosmetics. He even experimented with using peanuts in medicinal treatments, creating ointments, antiseptics, and other peanut-infused medicines that would have varying results in their effectiveness. His published works detailing the wide array of uses for peanuts lead to their rise as a valuable crop planted in Southeast Virginia and throughout the country, transforming the agricultural economy in the United States.

After continuing his studies, Carver graduated from the Iowa State Agricultural School with a Bachelor of Science degree, followed by a Master of Agricultural degree. He received many job offers after gaining wide recognition in the field and ended up accepting a position under Booker T. Washington at the Tuskegee Institute, where he would oversee the newly formed agricultural school.

Before the mid-19th century, peanuts were only grown on a small scale. The first known commercial peanut crop was grown in 1842 in Virginia’s Sussex County, close to the present-day town of Waverly. The sandy, loamy soil of the region was the perfect consistency for growing peanuts, and over the next four decades, Virginia would become the top producer of peanuts in America. But it wasn’t just the soil that put Virginia on the map when it came to peanut farming.

Photo Courtesy of the Library of Virginia

While George Washington Carver would increase the demand for peanuts, a Black Virginia farmer would actually revolutionize the farming of peanuts. Benjamin Hicks farmed peanut crops in Southampton County, Virginia, a crop that was difficult and time-consuming to harvest. In the late 1890s, Hicks invented a gas-powered machine that stemmed and cleaned peanuts, saving precious time and speeding up the harvesting process. He successfully patented this peanut machine, but was met with a lawsuit from one of the biggest, most powerful farm equipment companies of the era. 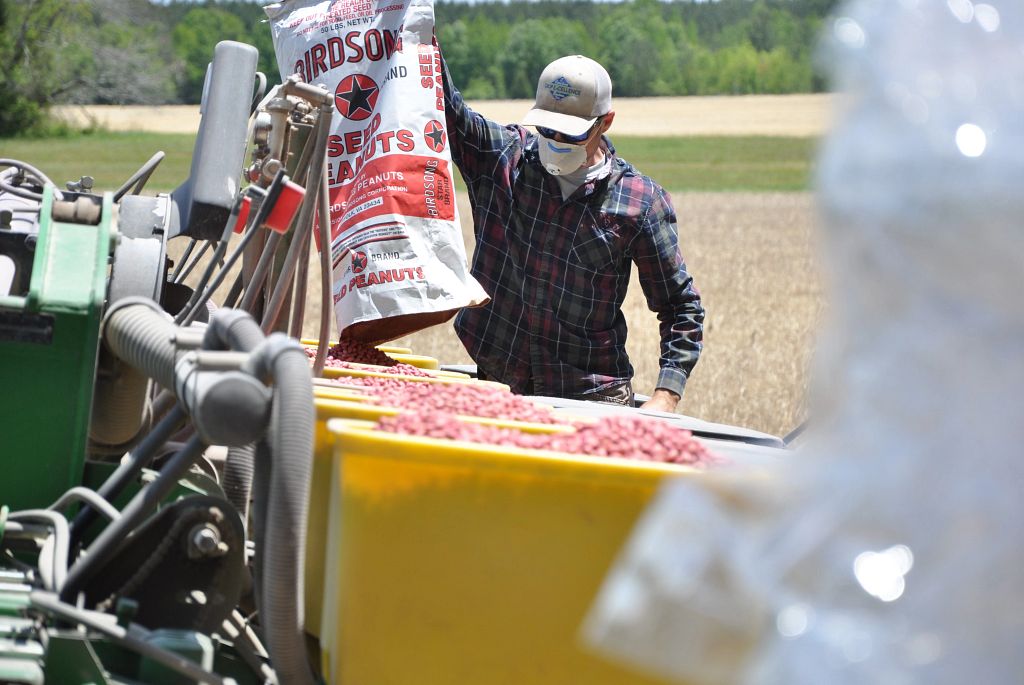 Luckily, Hicks ended up winning this lawsuit in 1901, and his picker machine went on to modernize the peanut farming industry. By 1902, Virginia’s Tidewater region held fourteen of the twenty peanut factories operating in the U.S., making it the leader in the quickly-growing peanut industry.

Where to Try Virginia Peanuts Today

If you’re looking to learn about peanuts today, there is no better place to do so than Virginia’s Western Tidewater region, where you can follow the Salty Southern Route to sample locally-grown peanuts as well as salt-cured hams and other pork products. Suffolk, which has been the epicenter for peanut processing and marketing since the late 19th century, is still heavily involved in the peanut farming industry. The internationally-recognized Planter’s Peanuts brand has called Suffolk home since 1913. The small town of Courtland in Southampton County contains several big names in peanuts, including Feridies and Belmont Peanuts, where their boutique shop and deli is located right beside the peanut fields, giving you a peek at the farming process.

Sussex County’s town of Wakefield is another big name in Virginia’s peanut production. The legendary Virginia Diner has been serving up home-cooked meals since 1929 while also producing world-class peanut products. Wakefield Peanut Company welcomes visitors to shop their storefront, filled with a huge variety of both raw and flavored peanuts as well as peanut-infused products. Wakefield’s Hope & Harmony Peanuts grow an estimated 1.5 million pounds of peanuts per year, and while the farm doesn’t have a storefront, you can find their peanuts at local shops or order online and ship them to your house (shipping is free to most states) to try these tasty treats at home.

Whitley’s Peanuts have several shop locations in Richmond, Gloucester, and Williamsburg. If you’re in the Williamsburg area, swing by The Peanut Shop to browse a wide selection of peanuts and other nuts, which make fantastic gifts for friends and family during the holidays. 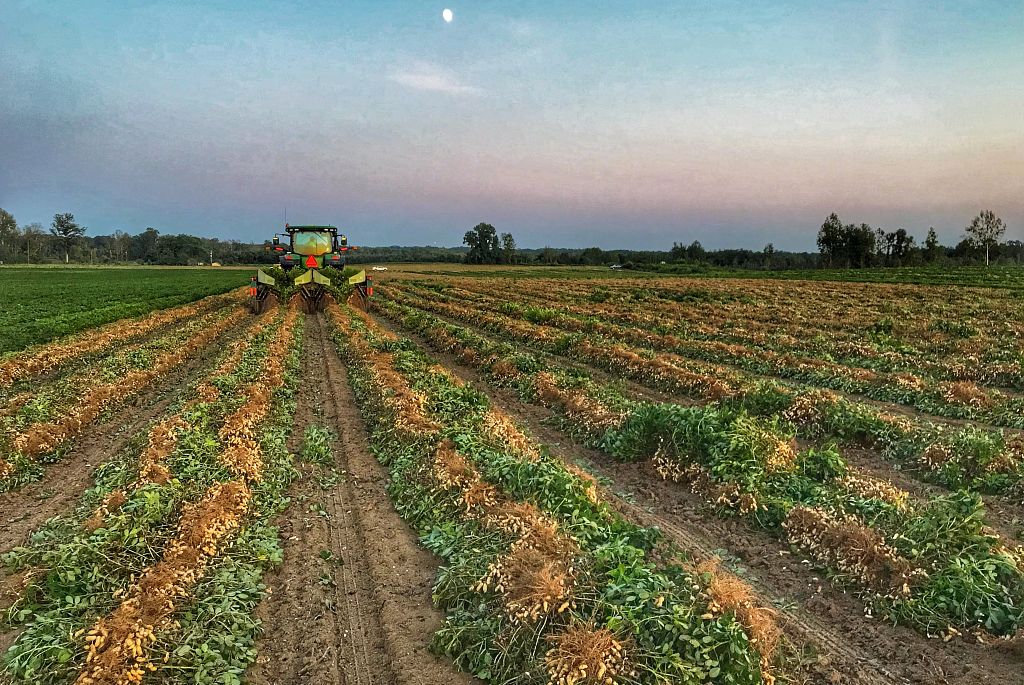 Hub’s Peanuts are another big name in the Tidewater region. While the company is based out of the small rural town of Sedley, they recently opened The Hubs Vine in the city of Franklin. This modern market and gourmet shop isn’t just about peanuts; you can find an array of specialty Virginia food products, handmade artisan goods, craft beverages, and games like cornhole that the whole family can enjoy. While the Hubs Vine may be the central peanut themed destination in Franklin, there are many other small peanut shops to peruse during your visit.

The towns of Smithfield and Surry are filled with local shops that carry Virginia peanuts, and we’ve even created an entire road trip itinerary for the region that will help you plan your next vacation to the region!

In addition to peanut shops and farms in the Tidewater area, you can also learn about the history of peanut farming at the Isle of Wight Museum (home of the world’s oldest peanut and the oldest cured ham) and the Miles B. Carpenter Folk Art Museum in Waverly, which is home to the first peanut museum in the United States. 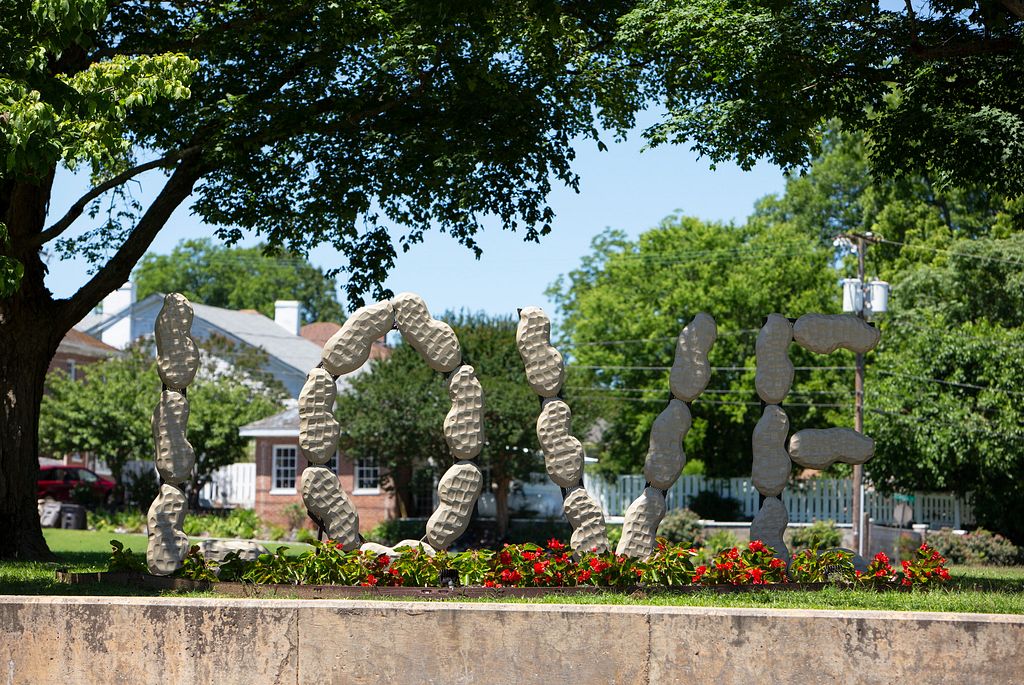 In the Southern Virginia town of Emporia, you can even take a picture in front of a peanut-themed LOVEwork!

Virginia Peanuts have come a long way since their arrival to the United States hundreds of years ago. They have been recognized as a superfood, are now celebrated as a protein-rich crop, and have become a solid staple in the Virginia culinary world. While there are peanuts grown in many other locations in America, the Virginia Peanut is by far the most sought-after and delicious variety. Plan a trip to one of these peanut-centric towns in Southeastern Virginia to experience the magic of Virginia Peanuts yourself. 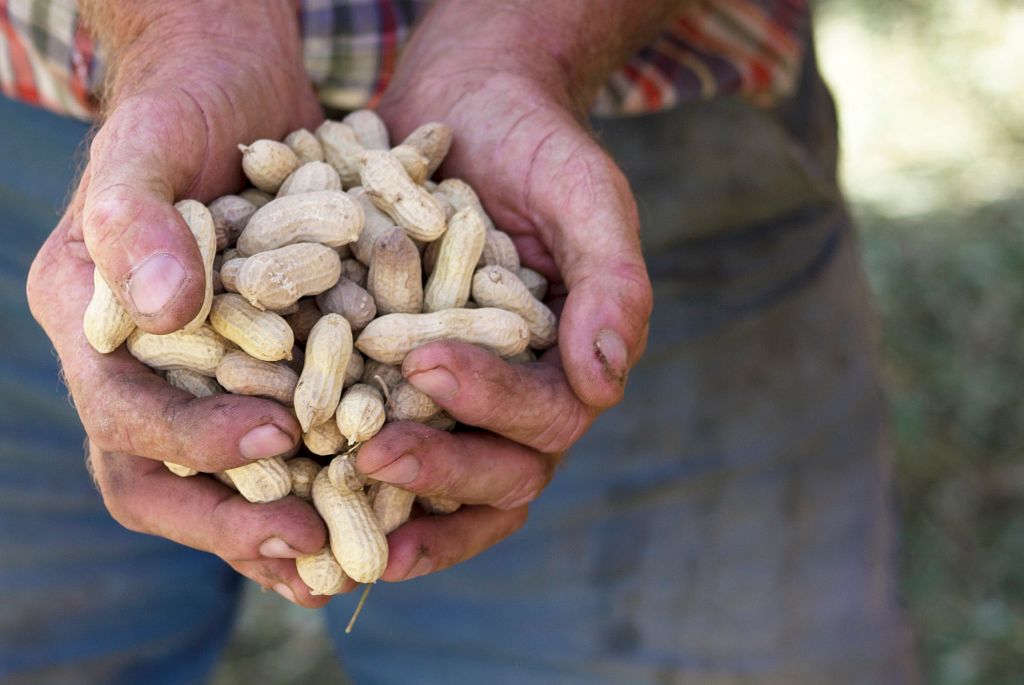 Here are a few quick tidbits about peanuts that you may not know.

Want to know more about Virginia’s lesser-known history? Dig into these articles and stay tuned for more But Did You Know… history pieces to learn about some of Virginia’s most incredible true but untold stories!